CONTAINS SPOILERS, AND IS LONG 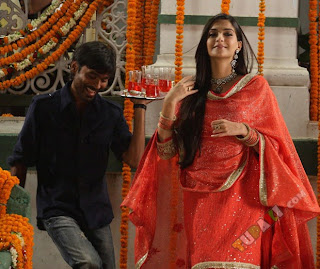 A lot was resting on the shoulders of Aanand L Rai – whether he’d be able to create the banaras atmosphere effectively just as he showed UP in Tanu Weds Manu, whether he’d do justice to the wonderful music of A.R Rahman, and most importantly, whether the two lead actors would escalate the movie by their acting or cause its downfall.
Well, Aanand Rai manages all these things, and much more!
As he puts it, Raanjhanaa was never meant to be a simple love story.
The movie begins with Naman Jain (Kid Dhanush) falling in love at first sight with Zoya. From that scene onwards, you know Raanjhanaa is going to be the actors’ show throughout. Naman Jain (Jhaangiya) is fantastic as usual. Every frame in which he is there lights up due to his lovely acting. 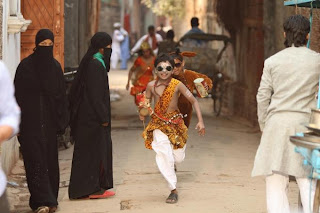 And soon kundan grows up. That school phase is wonderfully done. Firstly and most importantly, neither Dhanush nor Sonam seem too old to play school going teenagers. They infact convincingly look as school students. Secondly, the director shows a lot of childishness associated with people of this age – Kundan clinging to a pole and viewing Zoya, the playful banter between Kundan, Murari and Bindiya, Kundan on that plain and simple bicycle, Zoya in her school uniform with those pony tails and red hair bands – Aanand makes no mistake in depicting a small town life as realistically as possible.
Finally we have the grown up versions of Kundan and Zoya who take the story till the end.
STORY – Writer Himanshu Sharma once again comes up with a complex love story after Tanu Weds Manu. The story moves breezily in the first one hour. There are a lot of subtle twists and turns which help the pace of the movie a lot. Post interval the movie takes an entire different path, that set in the JNU campus of Delhi. There is some really nice depiction of the present political scenario in our country – the street play showing female harassment, the sequence where the college students go to clean up a street. It is different, makes you sit back and think.
DIRECTION – Aanand Rai’s direction is superlative. He shows a knack in his depiction of Banaras. He never hits you in the face with visuals and picturesque locations of banaras. Instead he chooses to focus more on the story. Banaras automatically grows on us. We get the feel of being present right there in those galliyaans of banaras.
At the same time, he makes the first half one colorful and lovely portion. The holi sequences are superb and well shot. Rai keeps few things common between Raanjhanaa and Tanu weds Manu - the lead actor is portrayed as a diehard lover, the lead actress loves someone else. Then there is this fascination for ornaments. If it was a pair of earrings in TWM, it is a pair of anklets in Raanjhanaa.

The second half takes things to an altogether different level. And YES, I belong to that group of people who liked the second half more. The first half is too perfect, as if paving the way for a grand reunion of Kundan and Zoya in the end of the film. But Rai proves us wrong. Akram’s death is one situation which fits in too well with the story. The focus shifts to politics, where Zoya tries to fulfil Akram’s dream. Kundan too joins in and manages to win the hearts of all the party students. However his world is Zoya and that is made evident till the end.

There is a momentary lull towards the end when you wonder that where is all this leading to? After all this, it would seem too filmy for the lead pair to reunite. You also feel the intensity dipping, and you can’t help but think what the ending would be like. But the storm which follows the calm is amazing. It is as if the entire political sequence was a build up for a grand heart wrenching ending. And that is exactly what it is! The ending makes up for everything. It tugs your heart and your lacrimal glands. In short, it makes a big impact. Well, isn’t that what we define as a CLIMAX?
CAST – Rai has always given importance to the characters apart from the lead characters. Just as there were Deepak Dobriyal and Swara Bhaskar in TWM, here we have Swara Bhaskar once again, Mohammed Zeeshan Ayyub and Shilpi Marwaha.
As Murari, Mohammed Zeeshan Ayyub is awesome. He gets the funniest lines and shows how well he has matured as an actor. 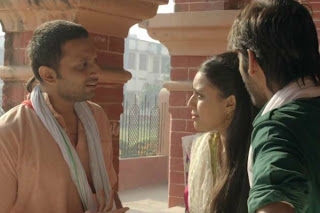 As Murari’s sister and Kundan’s childhood lover Bindiya, Swara Bhaskar (Sigh!) is simply outstanding. She is a great actor and she proves it once again after TWM. It was a pleasure watching her.
Shilpi Marwaha acts well as Abhay Deol’s sister. Kumud Mishra (Khatara bhai of rockstar) is brilliant.
Abhay Deol as Akram/ Jasjeet is instantly likeable and acts well. A short role, yet he shines in it. 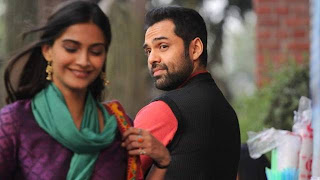 As Zoya, Sonam Kapoor is very good. I have never liked her acting TOO MUCH, maintaining that she is a mediocre actress. In Raanjhanaa, however, she proves me wrong. Her acting in the first half is lovely. Post interval, she disappoints a little. Where she was required to portray a slightly aggressive character, she becomes more of cardboard, erupting only occasionally. And yet, overall, I quite liked her. 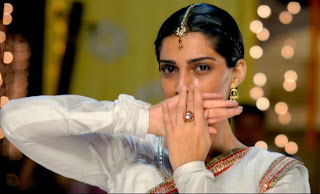 But the film belongs to one man – DHANUSH. It is an award winning performance. Dhanush proves that he is here to stay. His accent is cleverly justified in the beginning of the movie itself. Be it his thin and lean school boy part, or the grown up bearded part, Dhanush enchants us in every single frame of the movie. His comic timing is very good, and his ability to emote is impeccable. Those dances he breaks into right in the middle of a street are simply awesome. The scene where he breaks down wearing a sherwani is superb. One look at his face and we can see the one sided love for Zoya in his eyes. Even when he lands up in Delhi saying that he doesn’t know why he was there, we completely believe him. And then there is the climax! That monologue which goes in the background while he spurts blood is the best sequence of the movie. And as the movie ends, you cannot help but clap for Dhanush’s superlative performance. He deserves a nomination in all award ceremonies this year. He is definitely taking away all the “Debut actor” awards this year but he might even scoop up the “Best actor” award.

MUSIC AND BACKGROUND SCORE – Read my Music review of Raanjhanaa HERE
If there is one person who deserves as much applause as Dhanush, it is A.R Rahman. Honestly put, Raanjhanaa would never have been the same without Rahman’s music. The soundtrack is like a means for connecting loose strands of screenplay. When you have a complex screenplay, music becomes very important, because the songs might hamper the pace of the song. However full marks to Rahman for creating such a brilliant score. Kudos to Aanand Rai too for using all the songs and never making a single song seem out of place.
The title song is picturized beautifully.  Piya milenge portrays the glum mood to perfection. Aye Sakhi as the wedding song is perfect too. Nazar laaye na effectively depicts the romantic track between Zoya and Akram. Tu mun shudi appears as a flashback and is aptly placed. Aise na dekho appears twice and surprisingly seems perfectly placed. Even the lyrics make sense. Baanarasiya didn’t get the video it deserved. Such a lovely song didn’t deserve being placed during the background of one of the most hilarious sequences of the film.
But ultimately, it is tum tak which overshadows all the other songs. It appears many a times – firstly as the original song and thereafter as part of the background score, hummed by Javed Ali, and even as an instrumental version.
Talking about the background score, Rahman excels in this department; he always has. There is this church chorus type background score appearing during the climax – out of this world.
PHEW!
OVERALL, get set for one of the most intense and soulful love stories to have come out in a long time. It has its flaws but they can very well be overlooked.
With all its small town depictions, the wrist slashings, the heavenly music and the performances, Raanjhanaa is a must watch! There are innumerable moments which linger in your mind hours and even days after the movie ends. they haunt you with their sheer finesse. I am already contemplating watching it again.
Posted by Digi at 7:27 PM